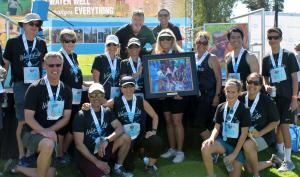 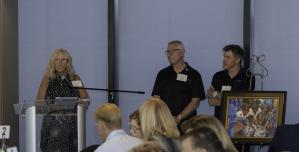 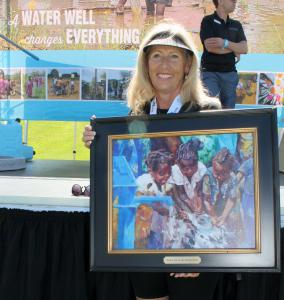 Patricia Doyle believes there were mothers in Uganda praying desperately for clean water for their children when God touched her heart over two years ago.”
— Patricia Doyle

MISSION VIEJO, CA, UNITED STATES, October 11, 2018 /EINPresswire.com/ — Patricia Doyle believes there were mothers in Uganda praying desperately for clean water for their children when God touched her heart over two years ago. Her participation in a 5K run in Southern California began a ripple effect that would ultimately fund seven water wells and save thousands of lives in Uganda, Africa.

In April 2017, a friend from church invited Patricia to volunteer for the Run4Water fundraiser benefiting the nonprofit organization Wells of Life. It was a day that would prove to be life changing.

Shocked by learning that a child dies every 21 seconds from a lack of clean water in Africa, Doyle became energized to take action at the passionate plea of Wells of Life founder Nick Jordan. She knew in that moment that she’d personally donate and get involved, but she wondered how she could spread the word to others.

Throw a stone in water and the ripple effect will begin.

Doyle oversees the RCIA (The Rite of Christian Initiation of Adults) at her church, San Francisco Solano in Rancho Santa Margarita, California. The program consists of classes for adults who want to join the Catholic faith. The 2017 fall session was about to begin and she’d been searching for something tangible to increase the students’ understanding of the word Catholic, meaning universal. Social justice is a big part of their teaching and she immediately thought of Wells of Life.

She shared the Wells of Life story with the group and they gave unanimous approval to form a team in the 2018 Run4Water. Their team goal was to raise $6,000; the actual cost to fund one well that provides clean water to 1000 Ugandan villagers for about 25 years. Overhead costs are covered by the organization.

Nick Jordan was the group’s dynamic social justice guest speaker which resulted in a funded well by a couple in attendance. One week later, another couple decided to fund a well.

Doyle told a close friend about the project. She and her husband had lost a son two years before and decided to fund a well in his memory. The couple reached out to relatives and another well was generously funded in their son’s honor.

The ripple effect has already resulted in four wells funded.

One young couple in the RCIA class had limited means but was determined to fund a well in memory of their beloved grandmother who had just passed away. They passionately reached out to family members but only raised $2000. When the rest of the class heard of their goal and passion, they stepped in and the remaining $4000 was raised.
With five wells now funded, the initial couple that donated a well connected Wells of Life with their company’s matching donor program and another well was funded. That same man shared Wells of Life at a retreat and a gentlemen in the group was inspired to fund yet another well.

Doyle is leading a new RCIA class this fall and the group has already committed to participate in the 2019 Run4Water. The busy real estate broker and 2016-2017 Catholic Woman of the Year for other philanthropic and volunteer efforts, Doyle sits on a panel for the Orange County Catholic Diocese and is an advisory board member for Wells of Life.

In late September, she hosted an event for Wells of Life in her home to spread the word to others. Every attendee donated to the organization and many joined the Water Warrior monthly giving campaign pledging $30, $60 or $100 to sustain and fund water wells in Uganda.

While Wells of Life is making a tremendous impact, an estimated 24 million Ugandans (Water.org) still lack clean water and 1 in 5 children under the age of five die from a waterborne illness.

To learn more about Wells of Life, visit www.wellsoflife.org.

About Wells of Life Wells of Life is a Christian organization founded on the belief water is a basic human right and should be available to all people regardless of where they live. Founded in 2008, the provision of clean water is viewed as the catalyst to free communities from poverty and progress to sustainable and healthy living. Their mission is supported through a variety of partnerships with schools, churches and businesses.