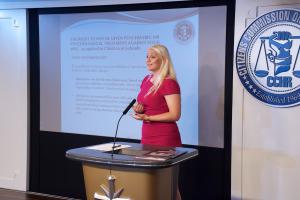 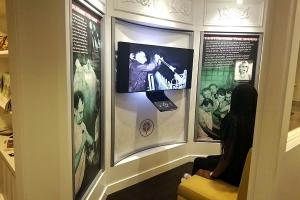 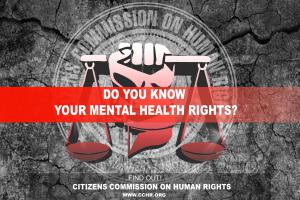 Citizens not only have a right to treatment of their choice. The right to refuse involuntary treatment is as important.

There is a tendency to speak about mental health rights only from the right to treatment perspective. We wanted to change the paradigm and teach people their legal rights to help prevent abuses…”
— Isabelle Vladoiu

The main theme of the day was “Know Your Mental Health Rights!” The exhibit aimed to bring awareness of the rights people have from a human rights perspective when dealing with mental health challenges. This included a one-day mental health exhibit educating the citizens on the historical and contemporary psychiatric theories and practices.

Vigilance has never been more needed. Latest reports from IQVia show that in the United States alone, more than 80 million people are now on psychiatric drugs — almost 13 million are younger than 24 years old, including over 600,000 children ages 0-5 years old. All while the psychopharmaceutical industry represents an annual market value of more than 300 billion dollars (Source: IQVia Total Patient Tracker Database for 2017, extracted April 2018.)

Approximately one million people worldwide, including an estimated 100,000 Americans, are given electroshock every year, including the elderly, pregnant women and children.

Some treatments are so potentially harmful that the United Nations Special Rapporteur on Torture, Mr. Juan Méndez, recommended an “absolute ban on all forced and non-consensual” administration of “electroshock and mind-altering drugs.”

“There is a tendency to speak about mental health rights only from the right to treatment perspective,” said Isabelle Vladoiu, Citizens Commission on Human Rights spokesperson. “We wanted to change the paradigm and teach people their legal rights to help prevent abuses and be able to defend themselves against dangerous and unwanted treatments.”

A presentation covered rights from the Mental Health Declaration of Human Rights including the right to full informed consent and the right to not be given psychiatric or psychological treatment against your will. Participants were given information on their rights in case of emergency holds for mental illness and involuntary outpatient commitment.

The one day exhibit included a special showing of the CCHR multimedia exhibition Psychiatry: An Industry of Death. Visitors were given booklets documenting the harmful side effects of drugs including antidepressants, mood stabilizers, antipsychotics and stimulants and the link between psychotropic drugs, suicide and violence.

The Citizens Commission on Human Rights (CCHR) was co-founded in 1969 by the Church of Scientology and professor of psychiatry Dr. Thomas Szasz. The nonprofit mental health watchdog is responsible for helping to enact more than 180 laws protecting individuals from abusive or coercive practices. CCHR has long fought to restore basic inalienable human rights to the field of mental health, including, but not limited to, full informed consent regarding the medical legitimacy of psychiatric diagnosis, the risks of psychiatric treatments, the right to all available medical alternatives, and the right to refuse any treatment considered harmful.

For more information about materials or participation in the Citizens Commission on Human Rights Washington DC, call (202)-349-9267 or email isabelle.vladoiu@cchrdc.org

Learn more about Scientology at www.scientology.tv