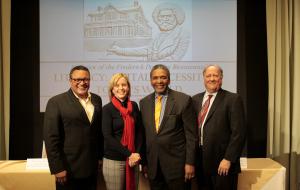 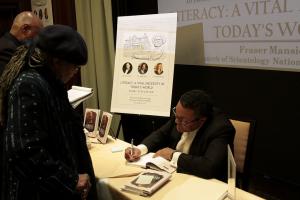 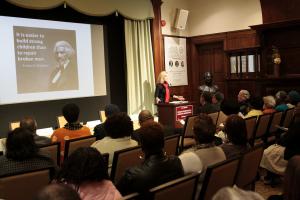 The most dangerous and destructive of all illiteracies is hidden illiteracy.”
— John Stanard

WASHINGTON, DISTRICT OF COLUMBIA, UNITED STATES, November 15, 2018 /EINPresswire.com/ — In honor of the Bicentennial Celebration of the life of Frederick Douglass, the Church of Scientology National Affairs Office hosted a panel of national and local leaders bringing to light the vital importance of literacy in the present day and providing solutions to achieving the goal of a literate nation. Frederick Douglass, a man who changed his nation and became a global icon, was born a slave but broke through the bonds of captivity because he realized that literacy would make him unfit to be a slave. This datum and the further pursuit of literacy led him to become one of the most well known American abolitionists, respected statesman, and renowned writer and orator.

Keynote speaker, Mr. Ken Morris, Jr., great-great-great grandson of Frederick Douglass and Chairman of the Congressional Frederick Douglass Bicentennial Commission, shared stories from Douglass’ autobiography, Narrative of the Life of Frederick Douglass, an American Slave written in 1845. Douglass’ master Mr. Aud, upon learning that Mrs. Aud was teaching the young Douglass to spell, said, “Now, if you teach him how to read, there would be no keeping him. It would forever unfit him to be a slave. He would at once become unmanageable, and of no value to his master.” These words sank deep into Douglass and laid the pathway to his freedom. This same idea has been found to be just as relevant today in preventing children and adults from falling prey to the modern slave trade. It has been found that educated individuals are far less likely to be trafficked. Mr. Morris founded the Frederick Douglass Family Initiatives, inspired by his progenitor, to continue the abolitionist legacy of his family and educate youth throughout the country to proof them against modern day slavery.

A study conducted by the Department of Education and the National Institute of Literacy found that, as of 2013, 32 million Americans cannot read. Millions more are considered functionally illiterate. In the 2015 to 2016 school year 6.7 million students received special education services due to having been labeled with learning disabilities and many of them have been prescribed dangerous psychotropic medications as a solution.

The second panelist, Dr. Frank Smith, Founder and Director of the African American Civil War Memorial and Museum spoke about the role and importance of museums in education today. Access to museums has been found to correlate with increased academic achievement. Noticing that access was not uniform and many children never had the opportunity, Dr. Smith has been striving to bring this access to all sectors of Washington, DC.

Panelist Ms. Barbie Rivera, educator and advocate and Founder and Director of the H.E.L.P. Miami school and tutoring center addressed illiteracy directly sharing the highly effective study methodology developed by humanitarian L. Ron Hubbard and her successes in its implementation with her students and their parents. She detailed how, with this study methodology, she has been able to take the students who come to her because they have been turned away by other schools, labeled as failures and told they were unable to learn and help them thrive, regain confidence in their abilities and graduate them into successful men and women who can make full contributions to society.

The event moderator, John Stanard, National Director of Social Betterment Programs and Policy for the Church of Scientology’s National Affairs Office, shared that "The most dangerous and destructive of all illiteracies is hidden illiteracy. This hidden illiteracy shows up in many ways in society as ‘low production’ or ‘inadequate quality of work’ or even ‘discipline of children in schools’. These symptoms may in fact be based in simple illiteracy problems which are easily addressed. With more than one billion of the world's population functionally illiterate, an effective educational methodology is not a choice, it is an obligation.”

At the end of the evening Mr. Morris signed copies of his great-great-great grandfather’s book, Narrative of the Life of Frederick Douglass, an American Slave for attendees. The donations will go towards placing copies of the book in schools to continue to uplift and inspire today’s youth to become tomorrow’s leaders.