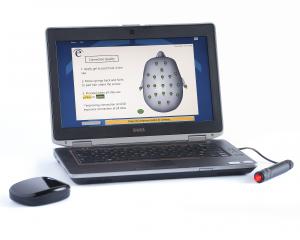 The eVox System aids in diagnosis of cognitive disorders

The eVox System is commercially available and used by primary and specialty care physicians to aid in diagnosis of memory loss and other cognitive disorders such as Alzheimer’s disease. In the ongoing study, eVox will be used to collect computational electroencephalography (EEG) and event-related potentials (ERP) metrics for 300 patients with cognitive impairment. Data from these patients will be used together with Evoke’s existing database of over 55,000 standardized patient brain scans in order to train a novel end-to-end machine learning algorithm and develop a diagnostic digital signature of AD. The resulting AI biomarker is intended to provide rapid, sensitive, and specific diagnosis of MCI and AD in a primary care setting, thereby accelerating next-level care in disease detection and treatment planning.

“Alzheimer’s represents one of the most important public health concerns to affect us in the coming decades,” explains Dr. David Merrill, MD, PhD, PBHC director and geriatric psychiatrist, and study co-Principle Investigator. “Although currently no cure exists for Alzheimer’s, one in three cases of dementia could be prevented by addressing various lifestyle factors. But the key to prevention is recognizing brain changes related to cognitive decline as early as possible so physicians have adequate time to implement successful interventions.”

As the size and proportion of the U.S. population age 65 and older continue to increase, the number of Americans with Alzheimer’s or other dementias is anticipated to grow from 55 million in 2019 to 88 million by 2050. Delaying symptom onset by as little as 1 year could potentially lower AD prevalence by more than 9 million cases over the next 40 years. Thus, there is a need for sensitive and specific diagnostic tools to facilitate the early recognition of individuals at risk of dementia, who potentially can benefit from preventive interventions capable of postponing or avoiding the onset of this severe and disabling cognitive disorder.

“Our goal is to eradicate Alzheimer’s disease, and the first step towards that goal is establishing a precise diagnostic algorithm for AD detection,” said Dr. Morgan Ingemanson, PhD, Director of Medical Affairs at Evoke Neuroscience and study co-Principle Investigator. “We are thrilled to have begun data collection on what we anticipate to be a pivotal study in the AD digital diagnostics space. This milestone represents our continued commitment to providing the clinical community with critical tools to help diagnose patients with cognitive decline, and we are incredibly optimistic about pairing patient data collected at PBHC together with our vast existing EEG database in order to develop an AD digital signature. It has the potential to revolutionize the current gold standard in Alzheimer’s diagnosis.”

Evoke Neuroscience (www.evokeneuroscience.com) was formed in 2009 with the mission to improve diagnosis and treatment of cognitive disorders with objective, clinically meaningful and easy-to-use products. The eVox® System is a Class II, FDA 510(k) cleared medical device that acquires objective and stable biomarkers of brain function in-office, via a non-invasive procedure in order to aid in the diagnosis of cognitive and mental disorders. Doctors should use their professional judgment in determining when the eVox® System is appropriate to aid in diagnosis.