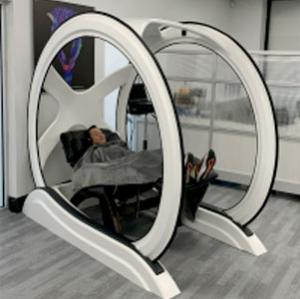 The Magnesphere in Operation

"We have been following the Magnesphere for some time and have seen the effectiveness. We are very excited to be able to provide this for our patients.”

"The Magnesphere is an exciting tool that will be utilized in our Synapse: Human Performance Center”, says Parker University Vice Provost, Patrick Bodnar, DC. "We have been following the product and the company for some time and have seen first-hand the effectiveness of the Magnesphere. We are very excited to be able to provide this for our patients.”

Parker University (Parker.edu), the 4th fastest growing college in Texas according to the Dallas Business Journal, was founded in 1982 by Dr. James William Parker, originally as Parker College of Chiropractic; in 2011, it changed the name as its curriculum expanded. Today, Parker University has 1,500 students and 27 academic programs including its famed chiropractic program along with master’s degrees in neuroscience, clinical neuroscience, and functional nutrition. Currently, Parker University’s chiropractic cohort is the second largest of any campus in the world.

Magneceutical Health seeks to help people achieve balance in their autonomic nervous system by utilizing their patented magnetic resonance therapy provided by the Magnesphere. The company has been in operation since 2010 but the research behind the Magnesphere was started by Dr. Jerry Jacobson over 30 years ago. For more information visit www.magneceutical.com