Involuntary examinations are being initiated on children without parental knowledge. The parent finds out AFTER their child has been Baker Acted. 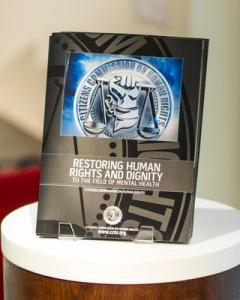 Restoring Human Rights & Dignity in the Field of Mental Health

Mental Health Watchdog has received hundreds of calls from parents whose children were sent for involuntary psychiatric examinations without their knowledge.

I want to empower parents and the public with the knowledge of what the Baker Act is and how it can be and is being abused so that they are aware of their rights under the law.”
— Carmen Miller, Esq.

CLEARWATER, FLORIDA, UNITED STATES, February 18, 2020 /EINPresswire.com/ — On February 10th, the Florida chapter of the Citizens Commission on Human Rights (CCHR), a nonprofit mental health watchdog dedicated to exposing human rights abuse in the mental health industry, held a public seminar in downtown Clearwater at the CCHR Florida center to raise public awareness on the Baker Act. The guest speaker was Carmen Miller Esq., a Tampa Bay attorney with over 8 years’ experience as a Hillsborough County Public Defender and hundreds of Baker Act cases under her belt.

Carmen Miller said of her seminars, "I want to empower parents and the public with the knowledge of what the Baker Act is and how it can be and is being abused so that they are aware of their rights under the law".

In 2018 an astounding 36,078 involuntary psychiatric examinations were initiated on children in Florida, an almost 19% increase over the past four years. [1] Called a Baker Act, an involuntary examination of a minor allows for a child to be taken into custody and transported to a psychiatric facility without parental consent or knowledge.

Over the past several years, CCHR Florida has worked to ensure that parents, guardians and caregivers are consulted before a child is Baker Acted. As a result, numerous law enforcement offices across the state have adopted internal policies requiring that parents be consulted before the Baker Act can be initiated on a child.

CCHR Florida's public seminars on the Baker Act and other mental health topics are regularly held at their center on 109 N. Fort Harrison Ave. They are complimentary and open to the general public. To reserve a seat at the next seminar please call (727) 442 8820 or visit https://www.cchrflorida.org/events-list/.

About CCHR: Initially established by the Church of Scientology and renowned psychiatrist Dr. Thomas Szasz in 1969, CCHR’s mission is to eradicate abuses committed under the guise of mental health and enact patient and consumer protections. L. Ron Hubbard, founder of Scientology, first brought psychiatric imprisonment to wide public notice: “Thousands and thousands are seized without process of law, every week, over the ‘free world’ tortured, castrated, killed. All in the name of ‘mental health,’” he wrote in March 1969.