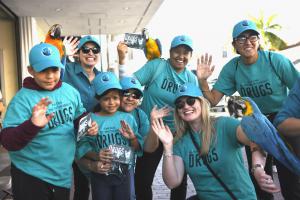 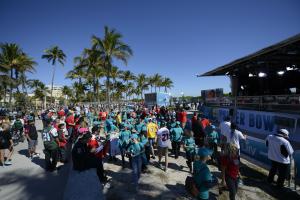 Volunteers handed out hundreds of thousands of booklets before, during and after the game. 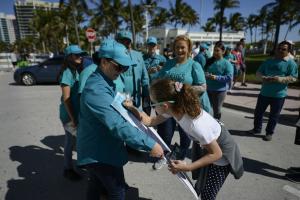 They invited young people to pledge to live drug-free. 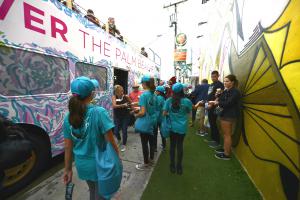 Drug abuse is a pandemic that affects the entire country and the world.

LOS ANGELES, CALIFORNIA, USA, February 18, 2020 /EINPresswire.com/ — With Miami hosting Super Bowl LIV, Foundation for a Drug-Free World (FDFW) volunteers from across the country brought their drug-free message to local residents and those in the city for the game.

Volunteers from nonprofits and churches of all denominations arrived at the central headquarters for the initiative at the Church of Scientology Miami. They were joined by those who simply heard about the activity from social media and drove up to the church to join the action. They packed their cars with boxes of drug education booklets to distribute them to stores and community groups or hand them out to friends, neighbors and those in Miami for Super Bowl LIV.

If you were watching the pre-game activities on TV or on Facebook, you may have seen NFL Hall of Famer Marshall Faulk, Foundation for a Drug-Free World national spokesperson, who took the message everywhere with radio and TV interviews, reaching an estimated 48.5 million people.

Drug-Free World Florida President Julieta Santagostino says, “We are immersed in a drug culture and no matter where you look, you’re likely to see something related to drugs. Most of the time it is glamorized, giving the illusion that drugs are something normal and acceptable. To change this, we must educate ourselves and our community with real facts. It’s an honor to be able to empower people by giving them the tools to help youth, and even adults, make an educated decision about drugs.”

The Foundation for a Drug-Free World is a nonprofit public benefit corporation that empowers youth and adults with factual information about drugs so they can make informed decisions and live drug-free. No one, especially a young person, likes to be lectured about what he or she can or cannot do. Thus, the Foundation provides the facts that empower youth to choose not to take drugs in the first place.