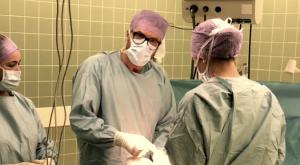 In Djibouti there are about 18 doctors / 100,000 persons. Prof. Dr. Altintas says as president of world congress surgery “It simply feels right to help Djibuti“

A total amount of 102 patients were operated on, including many children with burn contractures.”
— Dr. Altintas

In May 2020, the Plastic surgeon Prof. Dr. Altintas from Cologne, Germany, and the Team Mc Aesthetics started another medical mission in Djibuti and supported people in need.

Djibouti, officially the Republic of Djibouti, is a country located in the Horn of Africa in East Africa. It is bordered by Somalia in the south, Ethiopia in the south and west, Eritrea in the north, and the Red Sea and the Gulf of Aden in the east. Djibouti is a multi-ethnic nation with a population of over 921,804 inhabitants (the smallest in mainland Africa). French and Arabic are the country's two official languages. The life expectancy at birth is around 64.7 for both males and females. Fertility is at 2.35 children per woman.[1]

Nevertheless, Djibuti still struggles with numerous tropical diseases and basic medical requirements, why help and support are of great value. As the need for help is still widely spread the number of helpers is far from enough. Especially, doctors are being sought for longer-term missions. Therefore, the organization Aesthecef Worldwide supports doctors who are willing to provide medical assistance in developing countries such as Djibuti

Here from 05 to 12 May, a new mission took place in the city of Djibuti, one of the poorest countries in the world. The founder and managing director of the Mc Aesthetics and Dr. Martin Hellsing (CEO and founder of Aesthecef Worldwide) helped again – without any money, many poor people who cannot afford an operation and suffer a lot of pain. Due to an ongoing lack of a modern health systems in many African countries such as Djibuti, patients have no access to plastic and reconstructive surgery. Only through such operations on site it is possible for patients to return to normal life. In Djibouti there are about 18 doctors per 100,000 persons
A total amount of 102 patients were operated on, including many children with burn contractures.

“It simply feels good and right to help people out of their distress. My patients from Germany even gave me cuddly toys for the mission which we distributed to the children before the operation,” emphasizes Dr. Altintas.

For several years, the specialist for plastic and aesthetic surgery has been saving numerous lives in developing countries through such projects, and the number is rising because of missions like the one in Djibuti.

Prof. Dr. Altintas is the president of world congress surgery in Canada (2020). He is a specialist in Reconstructive plastic surgery, has been serving his patients all over the world, with his transformative cosmetic plastic surgery. His clinic named as Mc Aesthetic clinic is situated in Germany. Dr. med. Altintas is a certified board member in Plastic and Aesthetic surgery who was a vice Director in plastic surgery in Hanover, Germany. The Doctor is an M.Sc. in public health from the University of Heidelberg, has been a medical surgeon in many medical schools and colleges. He is also an honored proffer or teaching Cosmetic and aesthetic surgery in German Universities. Dr. med Altintas is also an editor in multiple journals in Plastic surgery and is known to have published more than 50 journals in plastic surgery and have also presented over 80 papers in various scientific meetings both nationally as well as internationally. Some of the remarkable surgeries provided in the clinic of Dr. Altintas, are six-pack Surgery(aesthetic plastic surgery, giving you prominent six-pack abs), lip Augmentation(giving you a fuller looking attractive lips), Rhinoplasty(gives a perfect nose shape, also help get rid of the breathing-related problems), double eyelid surgery(surgery to cure hooded eyes and eye bags, giving you a prominent crease), mammoplasty(breast enlargement surgery), liposuction(excess fat removing surgery, giving you a sculpted body shape). He is specialist for Burn Surgery.