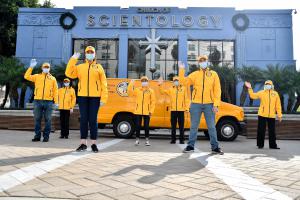 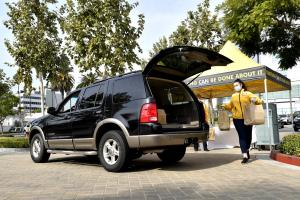 Volunteer Ministers moved turkey dinners from hotbox to car and rushed them to their destinations. 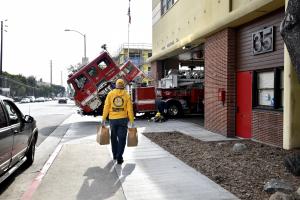 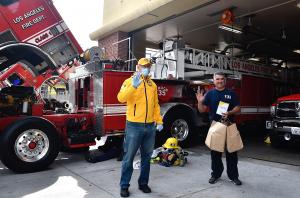 “It meant so much to them that we thought of them.”

Volunteer Ministers from the Church of Scientology Los Angeles celebrate Thanksgiving by letting essential workers know just how much they are appreciated.

Volunteer Ministers picked up 400 meals—the first round of specially prepared dinners—from hot boxes and delivered them Monday, November 23, to doctors and nurses, firefighters and police, and the staff of local supermarkets and pharmacies that remained open to serve the community throughout the pandemic.

Inside each bag was a message from the Church: “HAPPY THANKSGIVING from the Church of Scientology Los Angeles. Stay safe and stay well.” On the card was a QR code to the Church’s How to Stay Well Prevention Resource Center containing dozens of videos and three educational booklets: How to Keep Yourself & Others Well, How to Protect Yourself & Others with a Mask & Gloves and How to Prevent the Spread of Illness with Isolation. These are all available in 21 languages—perfect for the polyglot Los Angeles community.

The information in the booklets is based on effective measures researched for ensuring the safety of Scientology staff and parishioners, implemented internationally as protocols under the direction of Scientology ecclesiastical leader Mr. David Miscavige.

“Everyone was so appreciative to receive the dinners,” said one of the Volunteer Ministers. “It meant so much to them that we thought of them.”

Another set of meals will be delivered on Thanksgiving Day for those on duty over the holiday.

In May, Volunteer Ministers distributed more than 300,000 copies of these booklets to stores, restaurants, churches, clinics, hospitals and homes in the greater Los Angeles area.

The Church of Scientology Volunteer Ministers program is a religious social service created in the mid-1970s by Scientology Founder L. Ron Hubbard. It constitutes one of the world’s largest independent relief forces. A Volunteer Minister’s mandate is to be “a person who helps his fellow man on a volunteer basis by restoring purpose, truth and spiritual values to the lives of others.” Their creed: “A Volunteer Minister does not shut his eyes to the pain, evil and injustice of existence. Rather, he is trained to handle these things and help others achieve relief from them and new personal strength as well.”