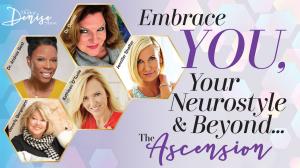 “The Ascension Show” begins its third season with an embrace of the unique way you process and perceive the world around you. Themes of “Neurostyle & Beyond, Sacred Sexuality and Agelessness” to Dominate

There are many individuals and many personalities out there —male, female, and young adults — who might have an ‘Ah ha!' moment, an insight, an epiphany from the various segments that we do address.”
— Beverly Bergmann, "The Ascension Show" Anchor

MANHATTAN BEACH, CALIFORNIA, UNITED STATES, April 20, 2021 /EINPresswire.com/ — The high-vibrational video podcast, “The Ascension Show,” embarks on a third season filled with themes of self-love, sacred sexuality and agelessness. Anchored by five women, the team is relatable due to its diversity, inclusiveness and reverence to the pulse of consciousness.

“We are not afraid to talk about anything; we’re fearless, we’re fierce,” says Ascension Media CEO & Founder Dr. Denise McDermott, MD. Dr. Denise, an integrative adult and child psychiatrist, believes this season will build on the universal truths the show examines by taking a deeper dive on the term she coined: #NEUROSTYLE. “Neurostyle means we all process and perceive the world in our own unique way,” she explains.

The first episode of the new season is titled “Embrace YOU, Your Neurostyle and Beyond.” “And beyond means we’re going to take it next level, bridging that unseen energy from other realms,” says Dr. Denise.

Prose and consciousness writer Beverly Bergmann, who joined the show last season as its fifth anchor, believes a wide audience will be thrilled with all the themes, including Sacred Sexuality and Age Is Just a Number. “There are many individuals and many personalities out there —male, female, and young adults — who might have an ‘Ah ha!' moment, an insight, an epiphany from the various segments that we do address,” says Bergmann.

The team invites viewers to learn that awareness, self-love and altruism are the building blocks of enhanced mental wellness. Through laughter, tears and a few doses of geeky science “The Ascension Show” focuses on the power of reverent relationships. “If you’re loving yourself and embracing your Neurostyle and if everyone was having healthier physical and emotional connections to one another and being more aware of the earth, our bodies and souls can you imagine how much happier the world would be?” says Dr. Denise.

The show is released at www.ascensionmedia.love on Sundays and it can also be found on YouTube under the Dr. Denise Channel. The audio only version of the podcast is available on Apple Podcasts, Spotify, The Mental Health News Radio Network and more.

“The Ascension Show” Reflects on a Successful Second Season